It's been another amazing day on the show floor. We finally made it to the stands that we wanted to see and drop of some orders. We're excited for you to see all the stuff that will be coming in the next few months. 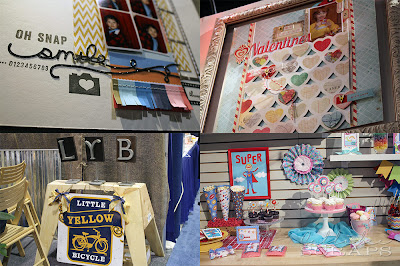 This morning started out bright and early (it's been clear blue skies for the last few days - but cold), so after getting our venti coffees and hot oatmeal from Starbucks (they definitely need this oatmeal in Hong Kong), we sat down for a very inspirational business seminar at 8:30am. I love it when speakers can hold your attention and convey their message well. At that time in the morning, it's sort of crucial, really. 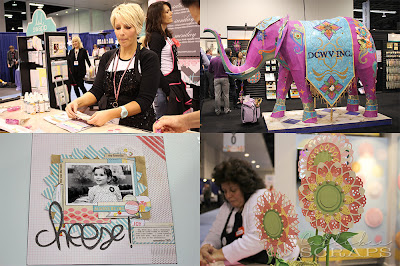 The doors for the show floor opened at 10am, and we were good today. We were focused, we were determined, and we got to all the stands that we wanted to. After that, we could afford a little time to look around at other booths, before I had to rush off for a two o'clock workshop. 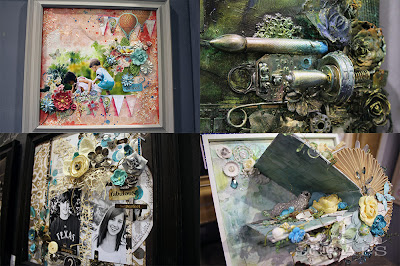 Prima warranted a photo collage of its own. There were so many amazing works of art and layouts, you couldn't help but stand and stare at them. Gobsmacking stuff!

This class was a little different. I thought it would be interesting to test my drawing skills, so this workshop demonstrates the art of Zenspiration - to me, artistic doodling. It's a whole new movement in line doodling. I remember covering my school files and notebooks with pencil markings during class when I should have been paying attention instead, but it's not something I've really thought of since. I was attracted to the unique designs and techniques to this kind of drawing. We learned to do dangles, lines and columns and how to fill them with lots of patterns. All in all, I don't think it was really for me, but it was fun to try out something new. 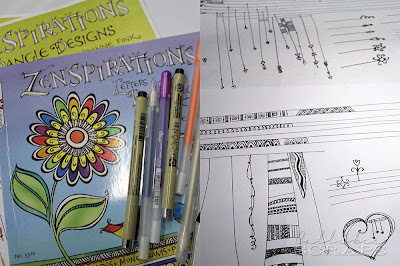 What do you think of my Zenspirations?

I'm now sitting in the lobby, leeching off the free wi-fi so I can write this while Angela and Erika are in a mixed media class. Bummed I couldn't get in to that one but looking forward to see what they did. After this, it's off for some Vietnamese pho. I think we're all homesick for some Asian food - we've been doing pizzas and burgers everyday and are just hankering for some "real" food.

Tomorrow brings another of workshops and more booths to see, so I'll do another updates then to show you some more yumminess.

Thanks for stopping by,